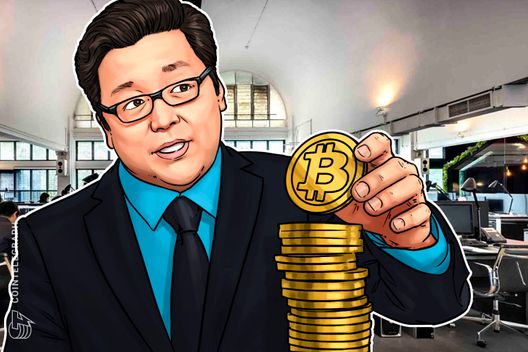 Bitcoin advocate Tom Lee is “pleasantly surprised” by the recent stability of Bitcoin, given “how small BTC is in terms of market capitalization.”

Fundstrat Global Advisors’ Bitcoin (BTC) analyst Tom Lee said that he is “pleasantly surprised” by the recent stability of BTC in an interview on CNBC’s Squawk Box Oct. 29.

Lee expressed surprise at Bitcoin’s recent behavior given a recent 9 percent slump in equity markets. Lee said he expected that “Bitcoin volatility should be much higher” based on “how small Bitcoin is in terms of market cap.”

When asked whether the current period of stability is “a good point to get in” for those wishing to enter the cryptocurrency space, Lee answered in the affirmative, as “Bitcoin seems to find its floor at $6,000.”

As for sustained BTC price growth, Lee said that the Bitcoin needs more fiat inflows, which is — in his view — real evidence of adoption. This will start happening by the end of this year or early next year, with the launch of new platforms and offerings from Bakkt and Fidelity, according to Lee.

Another factor that could influence BTC price growth is currency, according to Lee, as BTC is essentially priced in U.S. dollars. “So dollar strength has actually been a headwind for Bitcoin. But if the dollar begins to weaken, there will be a tailwind for Bitcoin,” Lee stated.

Crypto markets have been seeing somewhat continued stagnation over the past couple weeks, with few of the leading cryptocurrencies budging in price. As of Oct. 18, data from  Bitcoinity showed a consistent decline in BTC volatility, calculated as an averaged standard deviation from all market trades throughout 2018. Another explanation of price stability could be low trading volumes of BTC.

Crypto markets experienced some brief volatility on Oct. 29, when all of the major cryptos were in the red. As of press time, BTC is trading at $6,314, up just 0.41 percent on the day and down 2.62 over the last week, according to CoinMarketCap.

Previously, Lee claimed that Bitcoin “could end the year explosively higher,” citing a correlation between it and emerging markets. The “important correlation,” per Lee, lies in the fact that both markets are running somewhat parallel to each other, with both having “really essentially peaked” in early 2018, as well as “both [having been] in a downward trend” from then on.

Based on the results of last month’s Fundstat survey of 25 institutions and 9,500 responses to a public Twitter poll, Lee concluded that Wall Street is calling a bottom in BTC. Notably, 57 percent of those surveyed said that the BTC price is going to reach anywhere from $15,000 to “the moon” by the end of 2019.